Jaguar Land Rover has announced an investment approaching £1.5 billion to introduce an all-new technically-advanced aluminium vehicle architecture in forthcoming models to be powered by the Hotfire family of engines.

To support this strengthening of the Jaguar product portfolio 1,700 new jobs will be created in the UK at its advanced manufacturing facility in Solihull.

Dr. Ralf Speth, Jaguar Land Rover chief executive officer, announced the major strategy at the Frankfurt Motor Show to deliver an enhanced range of models for both the Jaguar and Land Rover brands in new segments and markets.


Commenting on the announcement, Dr Speth said, formerly of BMW: “Today’s announcement signals Jaguar Land Rover’s ambitions to push the boundaries and redefine premium car ownership. At Jaguar Land Rover we place the customer at the heart of everything we do and the introduction of a world class all-new aluminium vehicle architecture means we will be more competitive, flexible and efficient delivering exciting new products for our customers around the world.”

He continued: “Jaguar Land Rover is a business driven by design, technology and innovation and this investment and level of job creation is yet further evidence of our commitment to advancing the capability of the UK automotive sector and its supply chain.”

The first new model to utilise this innovative architecture will be an all-new mid-sized sports sedan from Jaguar. Launched in 2015, it will be the most efficient, advanced and refined premium sports sedan ever seen in the C/D segment. The new vehicle will pose both challenges and opportunities for the company's press shops in Castle Bromwich and Solihull as well as possibly Stadco's facility at Fort Parkway, almost adjacent to Jaguar's Castle Bromwich plant. The lines of German press maker Schuler specialise in aluminium pressings.

This vehicle will feature the first engine to be built at JLR’s new £500m Engine Manufacturing Centre (EMC). The plant will build the new Hotfire family of high-output, fuel efficient petrol and diesel engines for JLR.

The new 1,700 jobs at the Solihull site in the Midlands will bring the total number of UK manufacturing jobs announced by JLR over the last three years to almost 11,000. The so-called 'Baby' Jaguar will be aimed at BMW's 3-series. The additional 1,700 workers are expected to add 7,000 'knock-on' jobs with UK suppliers. 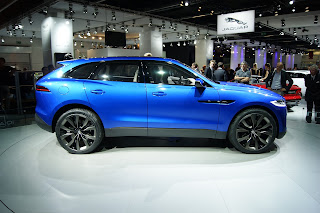 Jaguar has also revealed its first 4x4sports crossover concept vehicle – the C-X17 – which was created as a design study to introduce the all-new aluminium monocoque architecture.

The C-X17 concept illustrates the diversity of vehicles that could be produced using the architecture such as the four-seat sports crossover.

The company says the inherent flexibility of this all-new technology will enable the JLR business to not only enter but aggressively compete in exciting new segments, creating new markets for both brands and deliver a wider range of compelling products tailored specifically for its demanding customers. It is forecasting a fuel economy of 70 mile/gal.

For Jaguar, this will be the basis on which an exciting range of future cars will be built. A modular and scalable vehicle architecture which will be high-strength, lightweight and incorporate innovative efficiency technologies.

UK Business Secretary Vince Cable said: “Jaguar Land Rover has been experiencing great success over the last couple of years but this ground-breaking project takes Jaguar onto the next level.

“This all-aluminium architecture project typifies the type of innovative and high value R&D that the UK excels in and Government is supporting through the automotive industrial strategy.”

In order to fully realise the potential of this vehicle architecture Jaguar Land Rover will significantly increase spend with the supply base. This latest announcement from the UK’s largest premium automotive manufacturer builds on a sustained programme of continued reinvestment.