In its latest quarterly magazine, RQ, Ricardo has picked up the news that both Volkswagen and Volvo have ‘new generation diesels’ in prospect.

The journal says that both firms are ‘set to raise the game in engine efficiency’ with the next generation diesels boasting significant increases in injection pressures and much closer control of the combustion process. This blog, autoindustrynewsletter, has already highlighted these developments

Ricardo noted that VW will introduce high-performance diesels with 3,000bar common rail systems and specific power outputs of 100kW (134bhp) per litre, promising a 15 per cent improvement in efficiency by 2020. This compares with around 2,000bar today.


Ricardo adds: “Company sources suggest that an electric supercharger is used to supplement the conventional turbocharger.”

Ricardo makes no reference to engine construction but such high injection pressures might suggest VW will opt for compacted graphite iron (CGI) cylinder blocks to secure such high performance.

Why are such high pressures necessary? Higher nozzle pressures enable the fuel to be injected over a shorter crank-angle period.  This allows injection to start later, i.e. closer to top-dead-centre (TDC), so reducing the ‘negative energy’ created when initial combustion resists the still-rising piston.

And it allows earlier post-TDC injection cut-off, so reducing the amount of fuel-wasting incomplete combustion (and particulate formation), as the descending piston degrades cylinder pressure.

Ensuring that sufficient air is available to sustain the resulting ‘faster’ combustion is a further challenge. Clearly, from the Ricardo quarterly, VW hopes to meet through the use of an electrically-powered and electronically-managed supercharger, supplementing a conventional exhaust gas driven turbocharger.

Torotrak in the UK is developing superchargers for next-generation gasoline and diesel engines.

In the same issue of RQ, Ricardo addresses the topic of supercharging, but in a different application. Ricardo has been working on its ‘Alpha Project’ – a US Armed Forces’ Fuel Efficient Ground Vehicle Demonstrator (FED) project.

The vehicle features a ‘Ricardo-optimized’ Cummins diesel I4 engine with a supercharger and turbocharger and Aisin six-speed transmission that were each calibrated specifically for tactical vehicle fuel efficiency, based on the representative drive cycle developed.

Ricardo claims results showed the FED Alpha vehicle as having a 72 per cent improved fuel economy over the existing vehicle in the driving tests.

Meanwhile, in the latest RQ, Ricardo points to Volvo Cars’ new diesel as being part of a wholly new generation of downsized four-cylinder engines, including gasoline engines set to debut ‘later this year’.

Upgraded diesel performance and economy are promised from Volvo Cars, not from higher injection pressures per se, but from more sophisticated injection control which incorporates closed-loop control using pressure sensors

In these engines the feed-back loop links the combustion pressure sensors to the Denso i-ART 2,500bar injection, allowing not only combustion to be much more consistent, but the engines can be run much more closely to their limits without fear of exceeding legislative emissions limits, even at extended mileages. 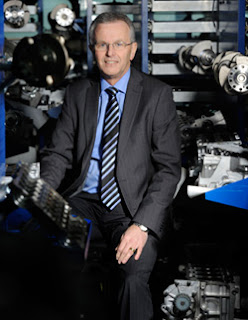 “It is the second step in the diesel revolution,” said Crabb. “It is a breakthrough comparable to when we invented the lambda sensor and the catalytic converter in 1976.”

Crabb has witnessed the aggressive development of its new modular engines following a 10-year period when the company was under the ownership of Ford Motor Company. During that period, Volvo not only shared engines with Ford but effectively stopped development of its own engines.

Now that process has been reversed in a modular four-cylinder engine programme that Crabb calls ‘downsizing and downspeeding’.

This suggests that Volvo cars will use some form of electrically-driven supercharger. Or maybe use Torotrak technology in the way that it has associated itself with Flybrid Automotive in which Torotrak has taken a 20 per cent stake.

Volvo Cars has capacity to make 500,000 engines a year according to Crabb, and is looking at making engines in China. The engines will be built at the group’s high-tech engine plant in Skövde, Sweden and will be launched in S60/V60 and V70 models first. Further details of possible hybridised versions are expected to be released later in the year.∎

Thanks for giving such information on New Car Quotes. Also waiting for the the next post.