GAZ Group, Russia’s largest manufacturer of commercial vehicles (CVs), has completed what Vadim Sorokin, group president, hails as “the most complex and large-scale project GAZ has implemented in the last 15 years.”
To accommodate production of the new GAZelle NEXT panel van, the OEM has performed a large-scale upgrade of its welding and stamping operations, investing a total of €132m (US$141m) in the facility


But the history of the Gaz NEXT (BELOW) goes back a long way. A very long way. In fact back to LDV in the UK. LDV was formed in 1993 as Leyland DAF Vans Limited following a management buy-out (MBO) of DAF NV's Leyland DAF van manufacturing division in the UK, following the bankruptcy of the Dutch company, with Allan Amey as chief executive. 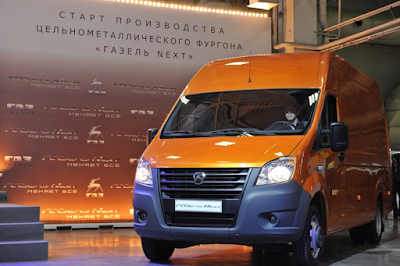 Later the name was officially changed to LDV Limited. Prior to its merger with Leyland Trucks and DAF Trucks in 1987, it formed part of the British Leyland/Austin Rover Group (ARG) empire and latterly the Freight Rover arm of the Land Rover Group division.


In December 2005, after going into administration, LDV was bought by Sun Capital Partners/Sun European Partners and subjected to financial restructuring in what proved to be a very short period of ownership.


Reports suggested LDV would retain its commitment to its existing customers, including an assurance from their marketing director that their production target of 1,000 vans per month would put them well above break-even point.


However, the Russian GAZ Group acquired LDV on 31st July 2006, and established a new company, GAZ International, based in the UK, to focus on the automotive industry. The UK’s broadcaster, the BBC, reported a GAZ spokesperson as saying that the company had appointed former Ford of Europe executive Martin Leach and former A.T. Kearney executive Steve Young to run the business, and that it planned to expand production at LDV's Birmingham plant by adding new product lines and entering new markets in Europe and elsewhere. This too proved short-lived


GAZ had plans to export LDV’s technology to Russia, and start production of the Maxus at the GAZ Nizhny Novgorod plant in Russia with 50,000 as an initial volume. There were also proposals to export the GAZ Maxus to Australia, a traditional market for British Leyland.


However, GAZ's plans never really showed any increased output and, due to the severe worldwide recession and a lack of long-term investment and commitment, production was halted at LDV's Birmingham factory in December 2008.


After UK Government tried once again to save the company by agreeing to pour in £5 million of grants to enable Malaysia's WestStar Corporation to purchase LDV, WestStar failed to secure financing.


LDV’s assets of the company were sold by administrators PricewaterhouseCoopers to Chinese Firm ECO Concept, on 15 October 2009, and then sold to SAIC Motor in 2010


The Maxus van, originally produced by LDV Limited, had been launched in late 2004. The model was jointly developed by LDV and Daewoo Motor, prior to Daewoo entering receivership in 2000, in a five-year, £500 million development programme.


Following General Motors' acquisition of Daewoo, LDV secured the exclusive rights to the vehicle, purchased the tooling and moved it from Daewoo's plant in Lublin, Poland to the LDV site in Birmingham. GAZ planned to manufacture the Maxus.


In 2011, the Chinese company Shanghai Automotive Industry Corporation (SAIC) launched a new commercial vehicle marque called Maxus, following its acquisition of the intellectual property of LDV in 2010. The LDV Maxus model was relaunched by SAIC as the V80 in June 2011.


And so back to today and the GAZelle NEXT, which comes in cargo van and cargo-passenger variations, the OEM’s first foray into the 13 cubic metre capacity van segment. By strange coincidence, the SAIC V80 version of the Maxus will be launched in the UK next month, courtesy of the Harris Group, a company in Ireland run by Pino Harris who nominally has been importing and selling Hino 8x4 eight-wheeler heavy truck chassis into Ireland and the UK off and on since 1968. In a further strange twist, Harris Group is reputed to be on the verge of importing China-made Sinotruk A7 8x4 eight-wheeler truck chassis that could compete directly with the Hino versions that Harris Group has specialised in importing. If the latest twist with SAIC's heavily re-engineered V80 comes to pass, then this will bring the LDV's vehicle back to the UK where it all started. New LDV vehicles have been absent from dealer forecourts for seven years, even though many second-hand vans continue to give good service. Interestingly, the V80 van coming to the UK continues to be powered by VM Motori's 2.5-litre four-cylinder diesel engine. These vans will have to compete with the all-new VW Crafter which will be launched next year - it will not contain any Mercedes-Benz components and will be a completely new-from-the-ground-up vehicle. Significantly, both Mercedes-Benz and Volkswagen have led the charge to introduce mammoth-size vans, even moving up to 17 cubic metres.

A GAZ spokesperson explained that such dimensions presented challenges that called for an overhaul of existing systems and introduction of further automation.


“Van production requires stamping, welding and handling of large surfaces, which in turn requires specific equipment,” she said. “These include including with a higher load capacity and special dies in the stamping process.”


“This is a new generation of van that differs from the previous models, and not just in terms of design – GAZ has never produced vans with a body volume of over 13 cubic metres.”


The new van has a 30 per cent larger than the previous generation of GAZelles and this has required plant improvements.


Presses on the stamping line have been fitted with equipment specifically designed for the project in order to handle larger side panels, underbodies and doors. Along the welding line, overhead tracks have been installed to which robots can be attached. This allows for precise and speedy welding of hard-to-reach spots.


Part of the upgrade includes automation of the lines to the point that three-quarters of the line is now automated.


“Robot systems can ensure high quality in components,” said the spokesperson. “They can eliminate human error, and allow for compliance with the stricter dimension and connection tolerances demanded by the new model.”


Numerous robotics suppliers have been involved in the project. Six-axis KUKA robots handle parts along the stamping line, whilst 83 robots from Japanese supplier Fanuc are now used along the welding line. Integrated feedback systems allow Fanuc robots to adjust their programmes to ensure quality.


Grinding operations, previously carried out manually, have also been automated.


Quality improvements have been a key focus for GAZ as it continues to make headway in markets outside of Russia, and develop export programmes. With the launch of the GAZelle NEXT, the company will be targeting CIS markets.


“Nearly all of our LCVs are made of galvanised steel,” said the spokesperson. “Economic efficiency remains the key criteria.”


However, in the future, as other van makers turn to aluminium and composite materials, GAZ may follow suit. For example, Skoda has recently shown what is possible at its Mlada Boleslav facility.


Some high-strength plastics are being used. The GAZelle NEXT has plastic wheel arches, and the GAZon NEXT LDT has plastics wheel arches and bonnet,” said the GAZ spokesperson. “Application of plastics allows for reduction of preproduction cost and time, weight and end price. It’s also easier to repair.”


GAZ produces nine different models of light- and medium-duty commercial vehicles at its Nizhny Novgorod plant, and manufactures buses and heavy-duty vehicles (HDV) at 12 other locations.


Much reduced demand in Russia means many plants are operating under capacity – the Skoda line has capacity for 110,000 vehicles a year but is operating at 55 per cent capacity.
.

Looks like we could see different LDV Maxus derived vans from Russia and China competing with each other in some markets. That's likely to become a price war, the two plants being in low-wage countries.
The question then arises: should established European panel van makers, such as Mercedes, VW, Ford, Renault/Vauxhall/Nissan and PSA be worried? The van ranges from those manufacturers have become progressively more refined, enhancing driver comfort and convenience. They've also become ever more reliable; breakdowns are rare. So potential buyers of those Russian and Chinese vans with LDV origins, attracted by low prices, will need to be convinced that they won't face operational problems or driver complaints.