Columbus readies for the new ISV5.0

Journalists have been guided through Cummins’ first engine plant, the Columbus Engine Plant, otherwise known as CEP, where the new ISV5.0 will be built. Pilot engines are going down the line.

The last engine built at CEP was the N14 line. At one time the N14 accounted for more than half the heavy-duty road-going engines sold in America, and it developed an enviable reputation for being “bulletproof” according to . http://news.pickuptrucks.com/2013/10/cummins-indiana-plant-gets-ready-to-build-the-isv50.html#more.

Cummins no doubt hopes the new ISV5.0 (which it has been developing for the last 13 years according to sources) will prove just as robust as the N14. The plant still does machining on ISX blocks and heads but has been under-utilized since that engine assembly was moved to Jamestown, New York in 2001.


On the day of the journalists’ visit to the plant was “fairly quiet” since production of the ISV5.0 is not expected to begin until the fourth quarter of 2014.

Besides machining and assembly, the plant houses space for engineering, parts, purchasing and emissions personnel along with a technical centre. Up-fitting the plant for the ISV has been going on for well over two years.

The engine marks a breakthrough for Cummins Inc. as it is the company’s first engine to use a compacted graphite iron (CGI) vee cylinder block. Raw blocks come from the Tupy foundry in Brazil, the same company that makes vee blocks for VM Motori’s 3.0-litre engines; at one time Cummins did its own foundry work but it is not likely to re-enter the business.

Building 63 does the machining work on major ISV components, which is more involved than the ISB engine because there are three parts to the engine rather than two and the CGI block requires more robust tooling.

The plant uses 200,000 gallons of machining coolant, chilled in Olympic-pool-size vats. Block and heads are then moved to a train, not forklifts, for transport to the assembly area.

Turbochargers, front covers and air-handling subassemblies are all built and tested separately. Locating the build area is easy: a 500-gallon compressed air tank overhead supplies the air for testing the turbo.

CEP uses an above-floor conveyor system for flexibility and scalability. No one at the plant is prepared to say how many ISVs Cummins will build nor how fast. Maximum production speed is also kept a secret (even of it is known). But it is not likely to match CEP's top speeds of 650 engines a day. However, journalists were told that it takes about six hours from the time the engine is set on the assembly line until it's ready for shipping. 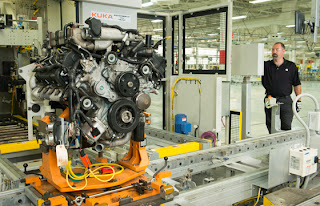 Station 1030 assigns a serial number to each block and head received from machining, but the engine's serial number and control parts list (CPL) code are added later.

At the chain station, where the four chains are fitted, 30 measurements taken for each engine. Every single engine also undergoes a four-to-five-minute cold-cell test with fluids (including fuel) but without combustion and a hot-cell test with combustion targeted at six minutes.

The hallway entrance was lined with graphic representations of darkened-out vehicles with a red ISV prominently placed where the engine goes. One graphic looked like a Ram pickup truck and another looked a lot like a Sprinter Class C motorhome.

In the past, CEP has employed as many as 4,500 people; it now has 1,600 employees. That number will grow as ISV production and sales ramp up.

However, for sure Cummins Inc. will require more than the order from Nissan (to power the Titan pick-up truck) to keep the plant running. So expect the company to announce other orders as time goes by. The Titan may not be the world's best pick-up truck but for Cummins Inc. it is a good start - and another breakthrough for CGI.∎