Achates Power Inc. of San Diego, California, has put a news story from Voice of America of 22 March 2016 on its web site noting that the company, Delphi Automotive and Argonne National Laboratory will have a three-cylinder opposed piston engine in operation by 2018 that is "50 per cent more efficient compared to a downsized, turbocharged direct injection gasoline engine, while reducing the overall cost of the powertrain system”.
On 1 December 2015, Achates Power Inc. announced it had received a $9 million Federal grant to develop a more fuel-efficient engine.

The three-year grant came from the US Department of Energy’s Advanced Research Projects Agency-Energy to support delivery of a three-cylinder, 3-litre opposed-piston gasoline compression engine for use in large sedans, trucks, SUVs and minivans, according to the company’s press release.
“Argonne and Delphi have already shown on conventional four-stroke engines that the potential of gasoline compression ignition (GCI) is significant – GCI provides diesel–like efficiencies, in a gasoline engine, without typical diesel engine and after treatment cost penalties,” claimed David Johnson, president and CEO, Achates Power. “Our opposed-piston engines have demonstrated superior efficiency and cleanliness when operating on diesel fuel. Combining our opposed-piston engine with GCI technologies will forever change the internal combustion engine market.”
Troy-based Delphi Automotive Plc, a partner in the project, is providing direct-injection equipment for the engine. The Lemont, Illinois-based Argonne National Laboratory will provide simulation and modeling for the project.
The three organizations were expected to invest $13 million toward the programme, on top of the Federal grant, Achates said in a release.
Achates Power claims it has given new life to the concept of the opposed-piston engine, mostly abandoned after the Second World War.
“With the opposed-piston engine, you're able to achieve the efficiency of a much larger engine in a much smaller package," according to Fabien Redon of Achates Power.
An opposed-piston engine is a two-stroke engine with separate oil flow. It has no cylinder heads and no valves, both sources of considerable loss of heat and power in conventional combustion engines.
Two pistons move against each other in the cylinder, compressing a fuel-air mixture, which self-ignites, pushing the pistons apart and generating power. Exhaust gases escape through ports in the cylinder walls.
Stripped of many conventional engine parts, the opposed-piston engine is said to be inexpensive and simple to manufacture. Generally, however, opposed-piston engines require two crankshafts. 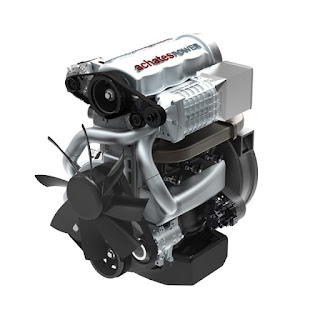 “We make sure that we do not over scavenge and achieve a very good combustion efficiency, so that unburned hydro-carbons and the emissions are reduced to a great extent," said Redon.
Larger opposed-piston engines have long been used for military and other applications. But developing them for consumer vehicles was not easy.
“This combustion strategy has some difficulties and weaknesses at low loads, because it needs a certain level of temperature inside the combustion chamber to make sure that the gasoline gets ignited," said Redon.
As reported previously by autoindustrynewsletter.blogspot.co.uk Achates Power is working with Cummins Inc. On 30 March 2015 the companies announced a military engine contract worth $14 million for a “single-cylinder opposed-piston advanced combat engine”.
Three features are critically important for combat vehicles: low heat rejection to coolant, high power density, and high efficiency.
Those developing opposed-piston engines have declared an interest in taking advantages of the benefits of higher-strength compacted graphite iron (CGI) as cylinder block material.

page 8 in this says CGI in the block. Other materials will not stand the high pressure.

"Multi-Cylinder Modular Development Engine The A48-3-16 shares most of the power cylinder with the A48-1 and in an effort to reduce the development schedule, many components are compatible. Similar to the A48-1, the A48-3-16 is designed for a peak cylinder pressure of 200 bar with overload conditions of 220 bar. The block was cast from compacted graphite iron (CGI)."

Q: What are the growt markets for CGI?

Dawson: ”Commercial vehichles and industrial power applications are obvious growt opportunitiies for CGI.”———-”We are also supporting the development of other small displacement diesel with 100 hp/l, and many of the new horizontal opposed-piston engines have specified CGI for the block and/or liner. ”